WPT technology is an old technology and it was demonstrated by “Nikola Telsa” in the year 1980. Wireless power transmission mainly uses three main systems such as microwaves, solar cells and resonance. Microwaves are used in an electrical device to transmit electromagnetic radiation from a source to a receiver. Accurately the name WPT states that, the electrical power can be transferred from a source to a device without using wires. Basically, it includes two coils they are a transmitter coil & a receiver coil. Where the transmitter coil is powered by AC current to create a magnetic field, which in turn induces a voltage in the receiver coil.

The basics of wireless power transmission include the inductive energy that can be transmitted from a transmitter coil to a receiver coil through an oscillating magnetic field. The DC current supplied by a power source is changed into high frequency AC current by particularly designed electronics built into the transmitter.

The required components of this circuit mainly include 20-30 magnet wire (gauge copper wire), A battery-1, transistor (BC548) and LED.The construction of this circuit comprises of a transmitter and a receiver.

Make a 15 turn copper coil and connect a light emitting diode to its ends. 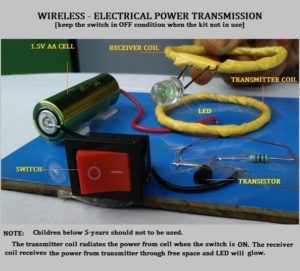 The wireless power transmission can be defined as, the energy can be transmitted from the transmitter to a receiver through an oscillating magnetic field.