The Automatic Street Light is a simple design which uses the following components:

LDR is Light Dependent Resistor works on the principle of Photo conductivity. It completely depends on the intensity of the light falls upon it. When the light falls on it, the resistance value gets decreased and when there is no light i.e. if it is kept in the dark place then the resistivity increases and its resistance will be high.

LED is Light Emitting diode which is the light source. It is simply a kind of diode which emits light when gets activated by any electrical signal.

5. Battery: 9V Battery is connected to the circuit as the power supply.

This is a simple circuit. The Transistor performs the switching operation to switch ON and OFF the LED based on which the LED will glow. Here, the transistor switches ON the circuit and activates the LED to emit light when the light does not fall on the LDR.

By using this Automatic system for street light controlling, we can reduce energy consumption because the manually operated street lights are not switched off properly even the sunlight comes and also not switched on earlier before sunset. 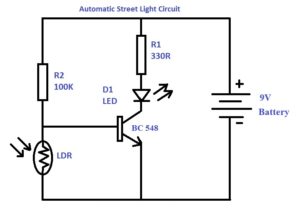